Sculptures that create themselves? Well not exactly, Jerusalem born artist, Sigalit Landau, puts a lot of hard work into her art and in 2004 started using the Dead Sea as her studio. It is nearly ten times saltier than any other given sea or ocean and when something is submerged in it for an extended period of time, salt crystalizes around the object. This is something Landau learned after spending time at the Dead Sea with her family growing up.

She began making sculptures and one that was made was given the title Salt Bride. It started out as a black dress and after being in the Dead Sea for months, in 2014, it was a white and glistening piece of art. 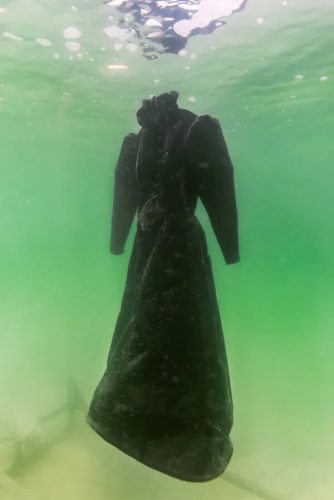 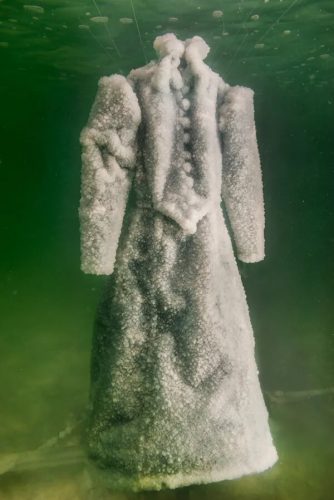 Salt Bride being crystalized in the Dead Sea

The inspiration to create this piece came from The Dybbuk. An early 20th century play, written by S. Ansky, that was originally titled Between Two Worlds. It is based on a Jewish folklore about a young woman named Leah who, on her wedding day, was possessed by her lover Channon. He had died when he found out she was engaged to someone else and spoiler alert! She ends up with Channon, not the man she was betrothed to. The dress Landau submerged is a replica of the one worn by the theater actress who played Leah. It first symbolizes her possession and when it turns from black to white, with its crystallization, it then represents her wedding gown.

Salt Bride when it came out of the Dead Sea

The transition was documented and exhibited using eight photographs and Landau brought light to the fact that creating the dress and creating photographs both require submersion in liquid. One being a lot easier than the other.

Even after years of experience with the Dead Sea Landau says “Working with and in the sea is difficult.” She continued, “The studio depends on a lot of teamwork, because it’s challenging and there are a lot of surprises.” Landau’s partner, Yotam From, was the one to photograph and film the dress underwater. In order for him to do so he had to wear about 150 pounds of weights to keep him from floating to the surface. The extraordinary area, that is the Dead Sea, not only helps create sculptures and has a shore that is the lowest piece of land on earth but it also causes great buoyancy. 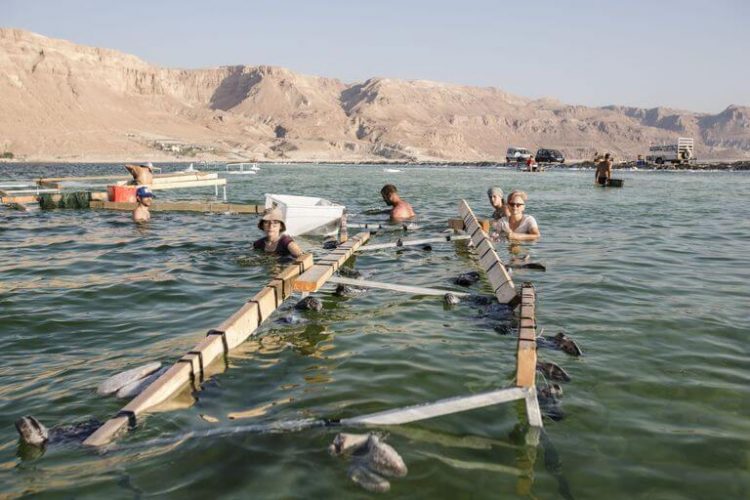 Structures for the crystal sculptures being made under the water

People float but as the dress transformed, the salt crystals added hundreds of pounds to its weight. It had to be submerged in a structure that could support it and getting the dress sculpture out of the water was no simple task. Fragments of it had to be left behind and a crane was used.

A lot of planning had to be done and Landau has come to understand what weather, time of year and which areas will give her the best results for her sculptures. Being between Jordan and Israel, temperatures at the Dead Sea average around 100 degrees during the summer. Most people would try and be somewhere else but Landau knows that heat speeds up the crystallization process. Summer is when she creates her salt sculptures but it’s not just about when and where to submerge pieces. The object being crystallized’s texture also plays a role. The Salt Bride dress was made in a way that Landau felt “the sea would respond to.” A netlike weave was used and, like every other piece that is put under water, it was checked on every few days.

Each sculpture that is made has a personal story behind it. Landau relates Salt Bride to her own marriage and a ballerina dress that was created relates to her time as a dancer. At 16 years old Landau was a ballerina and had an opportunity to leave home and become a professional. Her parents had opposing thoughts about whether she should go or not and were arguing about it. Because of this, Landau made the extreme decision to injure herself and end the fight about her future. She pulled a ligament and when the ballerina dress was exhibited it was placed next to a crystalized stretcher, which represented a wounded person. 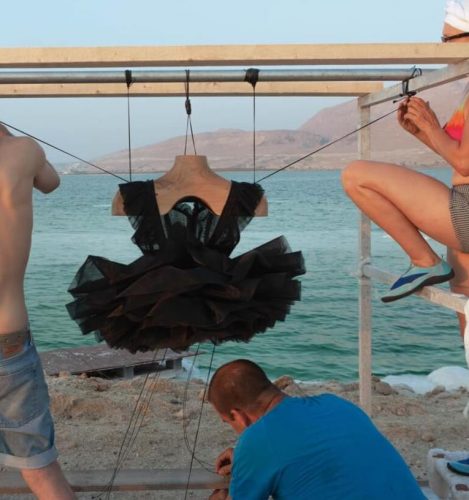 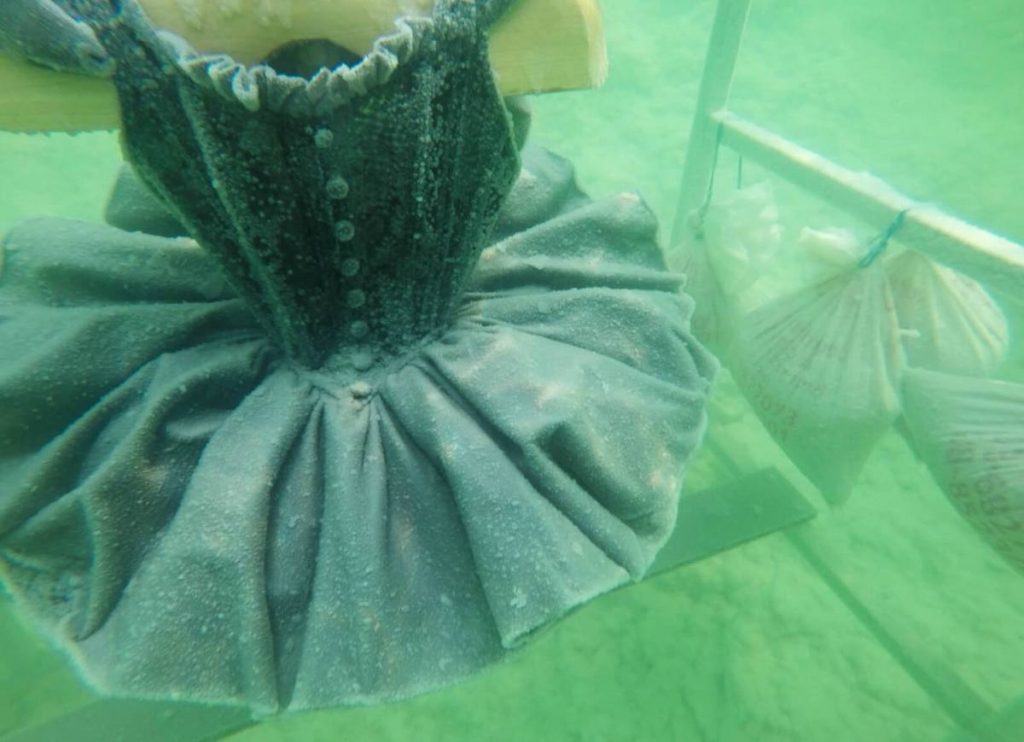 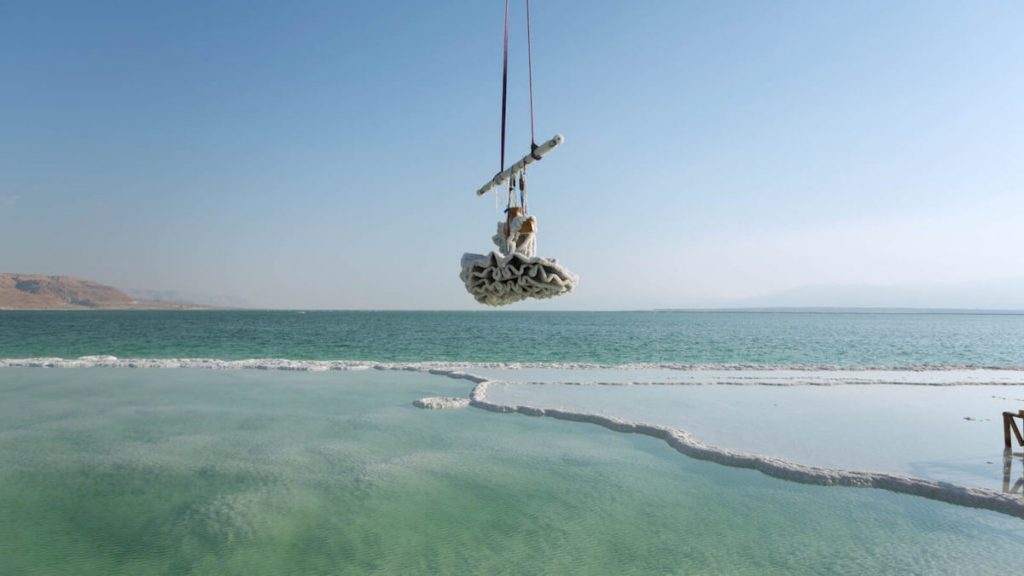 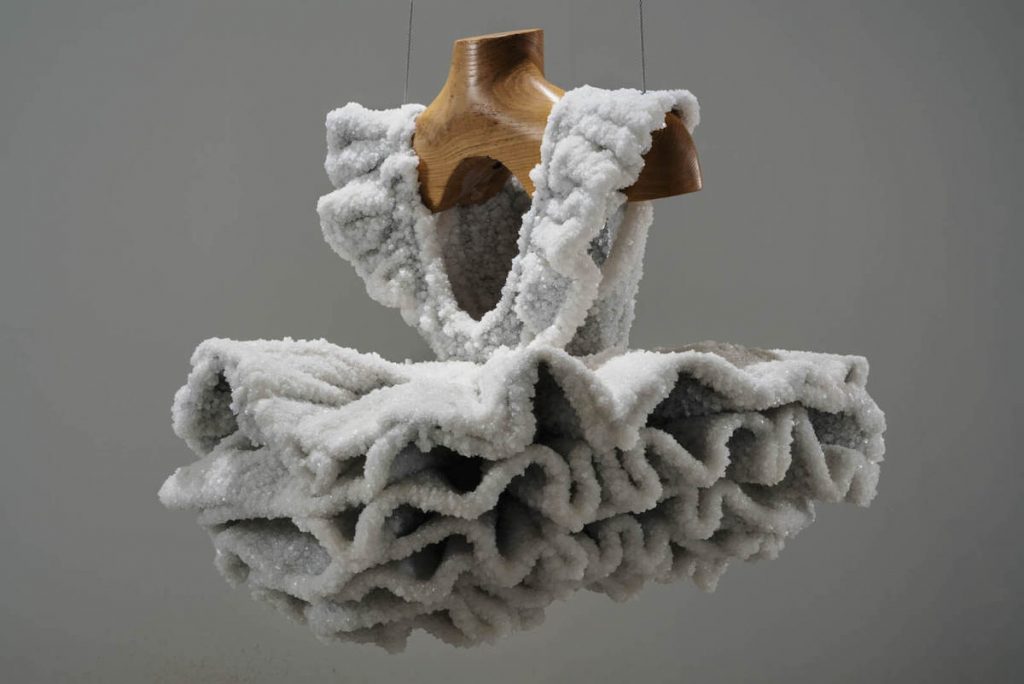 Stages of the ballerina dress sculpture being made

Besides her sculptures, Landau exhibits other art as well. She works with photography, video, and installations and studied at the Bezalel Academy of Art and Design in Jerusalem. Winning many awards and showing her work around the world, one could say she has definitely gained recognition.

Hard work pays off and another object Landau crystallized was a pair of boots. They were then brought to Poland and placed on a frozen lake where they were videotaped for a day. The salt eventually burned two holes in the ice, causing the boots to fall into the water, and a short film Salted Lake, 2011 was created.

Crystalized boots burning holes in a lake in Poland

Another pair of shoes that were crystalized were baby booties that Landau crocheted herself. Other objects were hand made as well and not all things that were submerged could be worn. A bike and a violin were also made. Talking about pieces she makes, Landau wrote, “…many of them stand for a world that has gone missing. By drenching the objects in the waters of the Dead Sea, I coat the artifacts in salt crystals, thus turning them into sculptures that help tell the story of the unceasing transformation of all things.” 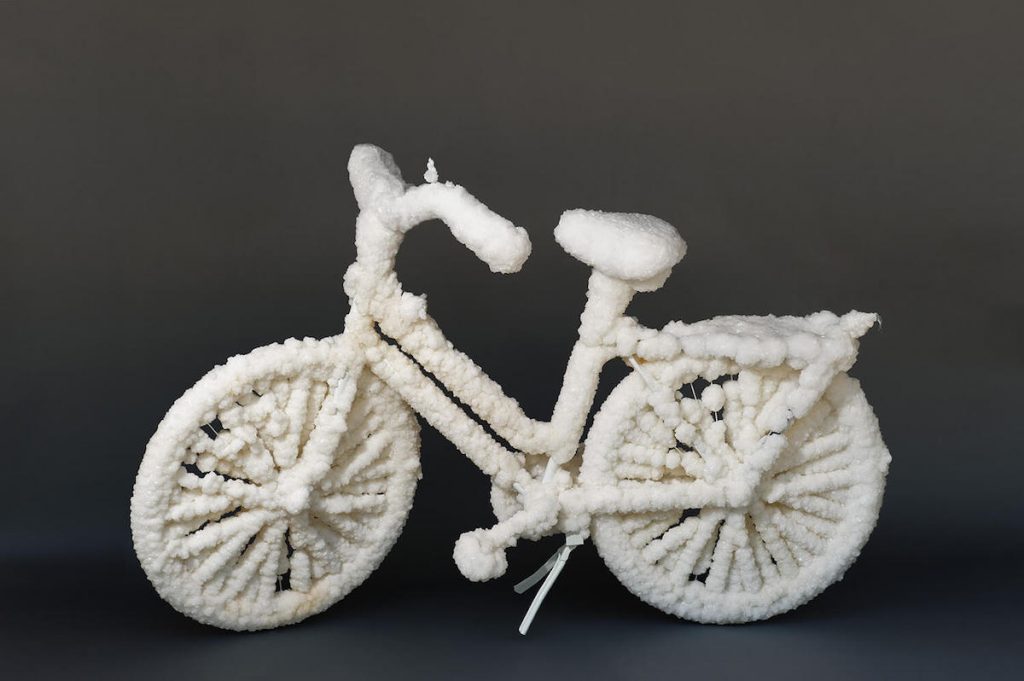 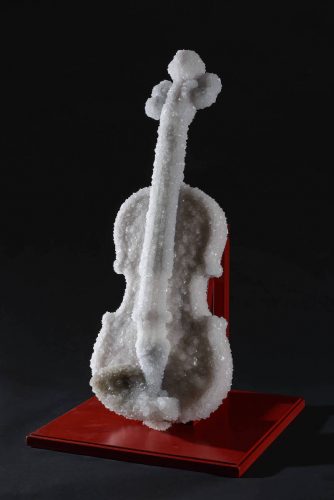 Landau feels a deep connection to the Dead Sea. When asked “What is the Dead Sea to you?” She answered by saying, “I know the sea and this area since I can remember myself. As a child I used to see it from the window of my home in Jerusalem. The years of working with the heavy liquid solution of the Dead Sea are connected not only to my personal and physical memories, but also to long gone memories of landscapes covered with snow and to a process of mourning; seeking to heal and to repair something through this dialogue with nature. Frozen, yet conceived by the desert sun and fiery-waters, the sculptures are for me like personal archeological testimonies crystallized and immortalized.”

These sculptures are not the only art work Landau has done involving the Dead Sea. She has also worked utilizing its buoyancy and we can’t wait for what she does next. 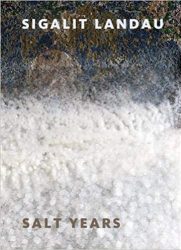